NEBRASKA CITY, NE – According to News Channel Nebraska, a bicyclist escaped without serious injuries after a collision with a pickup truck in Nebraska City Tuesday afternoon.

Local fire and rescue teams were on the scene of the accident at the intersection of 4th Corso and South 10th Street. Police said the bicyclist, Monte Crunk of Nebraska City, was riding southbound when he was hit by the truck.

Crunk suffered just scrapes and bruises and refused medical transport. He was able to ride away from the scene.

The driver of the pickup was identified as 42-year-old Bill Creek Jr. Authorities said he failed to yield the right of way.

If a driver’s negligence led to an injury to you while you rode your bicycle, the incident deserves immediate attention from the experienced Nebraska bicycle accident lawyers at Rensch & Rensch. We will aggressively protect your rights in negotiations with insurers and in court. To learn more, call us at (800) 471-4100, fill out a contact form, or chat live with us on our site. 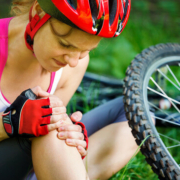