Police said Roth entered the intersection despite having a red traffic light. He was pronounced dead at the scene.

Alcohol was believed to have been a contributing factor in the case of the Altima driver, Lincoln Police said. 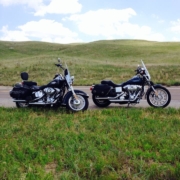